Imperius Dominatus uses 10-sided dice (D10s) to permit truly large battles in 6mm “epic” scale. It draws its inspiration from the many previous “epic”-scale rulesets (such as NetEpic), as well as many original ideas and mechanics. Scenarios permit games to be played in an afternoon with a built-in turn limit, or just play freeform for as much time the players have.

Have fun and enjoy the game!

Imperius Dominatus has explored the depths of the Dark Age of the Horus Heresy now embarks onto a larger narrative that of Warfare in the 42nd Millennium – The Dark Imperium!

The first faction to make its debut into the Era Indomitus are DA ORKS! Ferocious and unyielding the green tide of destruction now has its complete Army Book and Army Cards available. A modern take on this faction that includes old favorites as well.

Be amongst the first to join the WAARGH!

The Imperius Dominatuscore rulebook andarmy books and cards for the Heresy Era are now available for download.

Stay tuned as Imperius Dominatus enters the Dark Imperium with the first of its Era Indomitus army lists – Orks!

The Imperius Dominatus Core Rulebook, MKIV edition is a comprehensive ruleset where all the key mechanics for game play are explained. The ruleset applies to game play in both the Horus Heresy and Era Indomitus (40k).

The design strives to be easy to understand with a lot of “at a glance” mechanics to limit the time spent on accessing information during gameplay and focus more on actual play. 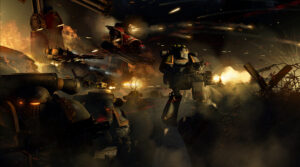 Daemons of the Ruinstorm Cards 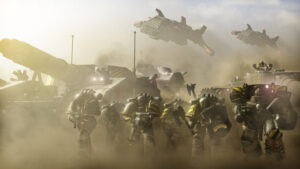 There is no Imperius Dominatus without the community’s support! It all began on the Facebook page here:

News, updates and content contributions are discussed there. We hope you will join us!

Imperius Dominatus is a fan-created rulset that is non-profit. Terms and names that are the copyrighted or trademark property of Games Workshop are used without permission and their use does not constitute a challenge to their ownership of such terms. © 2020 Peter Ramos.
Artwork by joazzz2, under the Creative Commons Attribution-Noncommercial-No Derivative Works 3.0 License.
Page design by Jodrell.